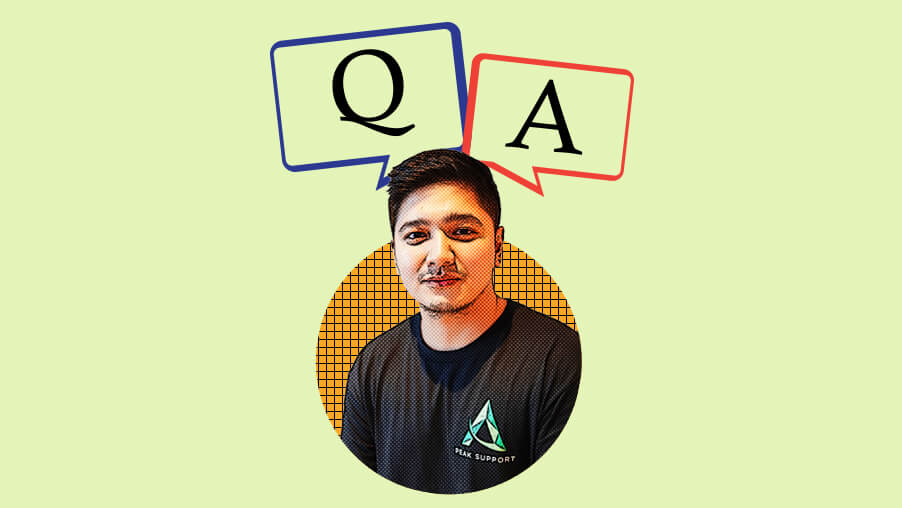 Martin was born in Olongapo City in 1994 and has four siblings. He’s a big fan of the Avengers movies and lists Bruno Mars as his favorite musical artist. Martin may seem shy or reserved at first, but he’s actually pretty talkative and has a good sense of humor. When he’s being silent though, he’s either bored or just being observant. But don’t let this talented young man’s quiet demeanor fool you. Ask any of his Team Leads about his performance at work, and they will all tell you just how impressive Martin’s work ethic is. His outstanding performance and incredible dedication to his job has led to his recent promotion as a Team Lead for his account. Get to learn more about Martin in this fun Agent Q&A blog.

What’s the one thing you can’t leave the house without?

My wallet, especially when it has money in it. Because it will always give me access to almost everything.

What’s the best place to visit in your hometown?

My hometown is kind of small. So the best places to visit are other nearby towns in Zambales. However, if you're not really up for the long drive and would just like to enjoy beaches that are similar to the ones in Boracay, then there are several private resorts in Zambales for you to choose from.

What’s the one household chore that you’re not very excited to do?

I rarely get excited cleaning up my bed. Simply because, at the end of the day, I’ll be laying down on my bed and it will become messy again. So why clean it? Hahaha!

If time and money weren’t an issue, what new hobbies would you like to get into?

Travelling the world with my whole family and making our house extraordinary by integrating technology to some parts of it.

What’s the best holiday on the calendar?

Christmas. It’s simple and we celebrate it in honor of Jesus Christ’s birthday. Also, celebrating this special day gives us the chance to see friends and relatives that we haven’t seen for a long time.

What is the most generous thing anyone has ever done for you?

I’m very thankful to have a family like mine because they raised me up to be the man that I am today.

Sadly, I don’t. That was almost 10 years ago. But I think it probably had something to do with an online game.

If you could only eat one unhealthy food for the remainder of your existence, what would it be?

I would eat chocolates! I know they can be very unhealthy but who doesn’t love chocolates, right? Like they always say, the most delicious foods are the ones that aren’t good for the health.

Tell us more about your first love.

She was my classmate in elementary school. She was my childhood crush and I admired her until we were in high school. We stopped communicating after she moved to another city to continue her studies. But then two years ago, she just sent me a message and we eventually ended up being in a relationship. Unfortunately, due to some difficulties we encountered, our relationship didn’t really last that long.

What object do you own that you don’t really use a lot (or at all) but just can’t dispose of?

A lot of my old gadgets aren’t working anymore. However, I find it really hard to dispose of them for some reason. Maybe it’s because I’m a techie person and seeing a lot of gadgets around me makes me happy.

If you were the last remaining human on Earth, what would you do?

I would probably eat lobsters, crabs, and chocolate ice cream, until it stops being fun.

Which celebrity (local or international) do you look up to?

Chris Hemsworth. He’s famous, rich, good looking outside (not sure about inside but I think he’s a good person), and has a lovely family.

I don’t really follow any superstitious beliefs, to be honest.

Who do you think is the best villain in a superhero movie?

Thanos. He’s a super villain to many superheroes, but he sees himself as a hero of the universe by bringing balance to mankind. He practically erased 50% of the universe’s population.

Which astrological sign, other than your own, do you think perfectly describes your personality?

Sagittarius. Because it has almost the same traits as an Aries. Some of this sign’s strengths are generosity, being idealistic, and a great sense of humor.

If you could donate $1 million dollars to just one charity, which charity will it be?

I would donate $1 million dollars to a reputable orphanage. We all know that the children are the future, so donating a big amount to a well-respected orphanage will help raise those children properly. There’s a big chance in the future that those children will do the same for others in need.

What’s your favorite souvenir from one of your travels?

I’m not really big on buying material things for souvenirs. But I would consider the experiences I’ve had in a place as my favorite souvenir. Just like that time I flew to Dubai to see my girlfriend. It was so much fun.

Which brand or product would you be more than happy to endorse for free?

I would gladly endorse for free any Filipino-made products that are worth buying. Endorsing my own country’s products will allow me to help my countrymen to become successful, as well as help my country’s economy grow.

What’s the best thing you’ve ever bought at a sale?

Where is the best place to go ghost hunting?

I think an abandoned hospital would be a nice place to start. Many deaths occur in hospitals and when a hospital is abandoned, I can’t help but wonder why it’s been abandoned in the first place?

Who did you send your last text message to and what did it say?

Aquasparkle (a water refilling station.) My family and I ran out of drinking water and I forgot to order the day before. So sending them a message was the first thing I did when I woke up.

If you could be stranded in the middle of the ocean with anybody in the world, who would it be?

Bill Gates. If I was stranded in the middle of the ocean, there’s a big possibility that I probably won’t survive it. But having Bill Gates there will hopefully increase my chances of survival what with his fame, wealth, and connections of course.

What is the biggest misconception about you?

That I’m a boring person. Well to be fair, I’ll answer a question here and there, but I probably won’t talk too much. I am a funny person though when I’m with my close friends and with people that I’m comfortable with.

Check out previous Q&As below: