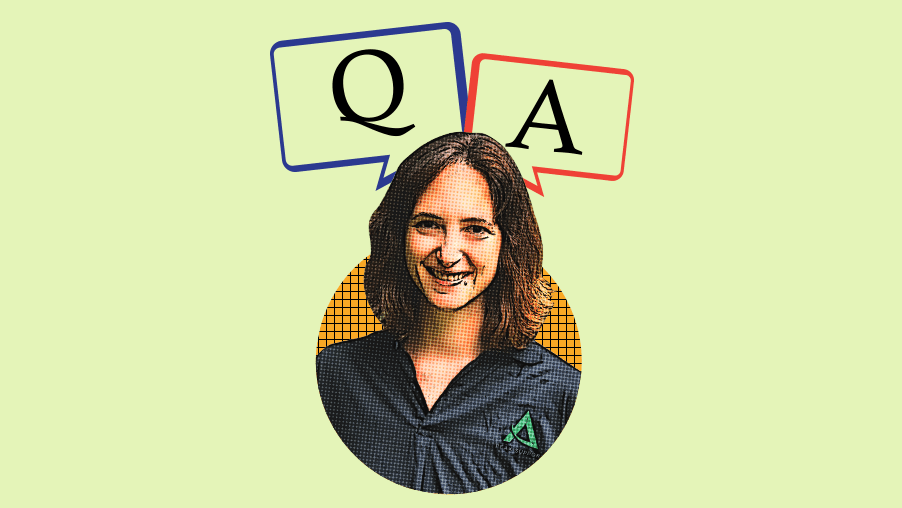 Hannah is the COO of Peak Support. She is a hardworking mother of two who usually wakes up early and allots 30 minutes of alone time before her kids get up. If there’s one type of food that Han will never eat - it’s tomatoes. The slime and the seeds just grosses her out. When she’s not busy working or taking care of her adorable children, you can find her either listening to the Hamilton soundtrack or reading a novel on her Kindle. Han used to watch “The Parent Trap” and “Flubber” a lot when she was younger. One of the best birthday presents she’s ever received was a black and white artwork featuring migrating geese. Who’s the one person who makes her laugh the most? It’s no other than her husband and Peak Support CEO, Jon Steiman. Read this special, anniversary edition of the Peak Support Q&A blog and get to know Hannah a little bit more.

Where do you usually like to be seated inside the airplane?

Always the aisle, because I always need to pee. Plus if it’s a long flight, I want to be able to get up and stretch.

What’s your biggest regret in life?

My biggest regrets are times when I wasn’t a good person, or a good friend. Or at least, wasn’t as good as I’d like to be. Once, in college, there was an accident that was my fault and a friend of mine got burned and had to go to the hospital. I didn’t go with her because I wanted to go to a party. Then I wrote an article about it for the school newspaper … she said later that I acted like it was something that happened to me.

Another time, also in college, I was with a friend who was black, and we were standing in line to order lunch. The man behind the counter asked me what I wanted, even though she was obviously standing in front of me. I responded with my order and then immediately realized what had happened, but didn’t know how to respond. I wish I could go back and say, “She was first.” Or at least, I wish I had apologized after. That was one of many ways I could have been a better friend to her.

Which celebrity would you not mind getting stranded in the middle of the desert with for a week?

Lin-Manuel Miranda because that would be so cool. Then we’d be friends, and I could hang out with him for the rest of my life, and other people would think I was so cool. Probably I should pick someone with survival skills, but I’m not going to.

If you could travel 20 years into the future, what would you like to see then?

I’d like to see the world moving farther away from the apocalypse. Right now it feels like we’re moving closer to it every day. Let’s actually address climate change, let’s make progress against racism and white supremacy, let’s stockpile PPE for the next pandemic. Let’s figure out a way that people can lose their jobs without losing their homes and becoming food insecure.

Who or what keeps you grounded?

My two kids. If I need to focus on the present moment and forget everything else, they make it easy.

Which non-physical trait do you like the most about yourself?

I think I give good advice. Maybe everyone thinks that about themselves.

What’s something that you’re just not very good at?

So many things! I’m an ok singer. I can carry a tune if I have a real singer singing along with me. I’ve never been very good at sports.

My sense of direction isn’t great. If I lived in a world where navigation was key to success in life, I would definitely be a C-level player.

I’m not very good at Scrabble. People are surprised at that, because I’m good with words. But there’s something about Scrabble…it just doesn’t click in my brain.

If you were to star in a rom-com, what song would you like to be the movie’s main soundtrack?

“Ice Cream” by Sarah Mclachlan. Maybe because I heard it recently for the first time in a while.

What’s the one thing that you believed in as a child, but realized that it wasn’t real when you became an adult?

I can’t think of anything. My parents were really honest with me - sometimes maybe excessively honest. I was never taught to believe in Santa Claus, for example. We’re teaching our kids that Santa Claus isn’t real because I just can’t bring myself to lie. We tell the truth about everything else, and we’re trying to help him sort real from pretend…why would we lie about this?

Who is your biggest inspiration in life?

My husband, Jon. He always supports me and encourages me to do more and be more. He just wants me to be fulfilled.

Plus, he is not afraid to admit he’s wrong. I’ve never known someone who’s so willing to adapt and change. He’s truly committed to our core value of Continuous Improvement.

Give us your top 5 tips for public speaking.

Is there an unusual food combination that you really enjoy eating?

Parsley dipped in salt water. I love plain parsley. I’ll eat it by the fistful. On Passover, we dip parsley in salt water, and it’s EXTRA good.

What’s the best piece of advice your parents have ever given you?

My mom gives great advice about parenting. Recently, I was wondering if I wasn’t doing the right thing to give our 3.5-year-old good eating habits. My mom said, “Well, I think the most important eating habit is, ‘Eat when you’re hungry, stop when you’re full.’”

Name a historical figure that you would like to have dinner with.

Sojourner Truth or Abraham Lincoln. Both of them were, according to the history books, very charismatic. Abraham Lincoln was known for his storytelling. Sojourner Truth was a black, formerly enslaved woman who became famous in the 19th century because of her speaking ability - an incredible accomplishment. But charisma can’t be captured in history books. I’d like to experience it.

Why do you think people fail?

People fail because we’re fallible. It’s ok. I fail every day. The important thing is to move forward.

If animals could talk, which animal do you think you’ll learn the most from?

Maybe cows or chickens. Because our lives are so intertwined with theirs. If we knew what they were thinking or feeling, we might change our eating habits.

When was the last time you slept for more than 8 hours?

What’s the one hobby that you wish you had more time for?

What do you think is the biggest injustice in the world today?

If given the chance to relive your childhood all over again, which part of it would you like to go back to?

I don’t think I’d want to relive any part of my childhood. I much prefer being an adult.

Complete the sentence: I always roll my eyes everytime _____.

My husband strikes up a conversation with a stranger.

What’s the most precious quality in children that you wish you had?

Boundless curiosity and a thirst for learning.

If you could discover the cure to something, what would it be?

What goal do you think most people aren’t working hard enough to achieve?