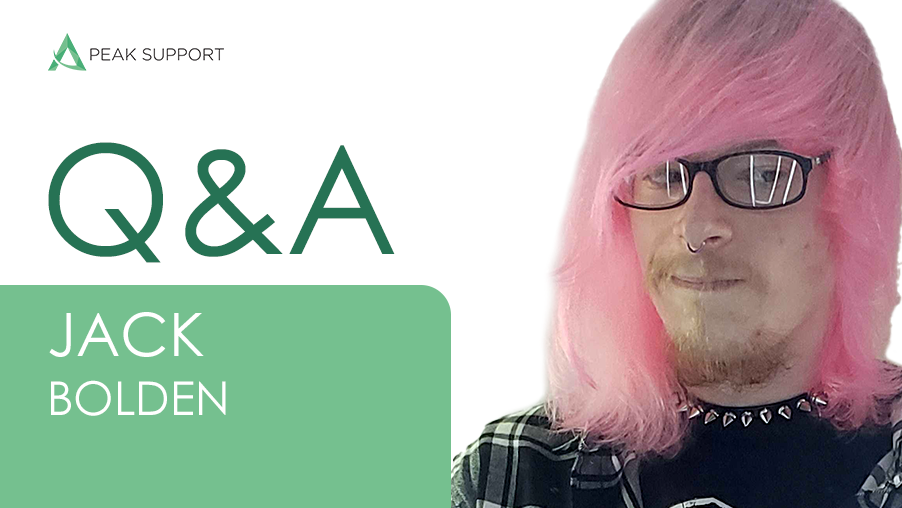 Jack is a Subject Matter Expert at Peak Support. He was heavily involved in acting and theatre productions in high school and spent years as a teenager both acting on stage and crafting set pieces and working on lighting and sound design behind the scenes. Anthems by Charli XCX, Eulogy by Creux Lies, Honestly? by American Football, Humiliation by The National, and Your Love by Mallrat are songs that Jack listens to over and over again. He enjoys watching teenage coming-of-age films from the ‘80s and ‘90s such as The Breakfast Club, Empire Records, and Clerks. The stories of outcasts and misfits finding their place in the world and the soundtracks are what draw him to such movies. And oh, a cool fact: Jack’s hair has been every color of the rainbow at least once. Read this month’s Q&A blog to get to know Jack better.

How good are you at karaoke?

I would probably give myself an above average rating, somewhere around 7.5. As Randy Jackson from American Idol would say, “It’s a little pitchy, dawg…” But I definitely have the spirit. I think having the right energy and ability to connect with the emotion of a song is more important anyway than being able to sing it perfectly in key.

What part of your morning routine do you wish other people did more of?

I like to wake up several hours before I’m expected to be productive, that way I have time to wake up slow and mentally prepare and focus for the day ahead. I have time to watch the sun rise, make breakfast, get a little exercise in, and take a nice shower. I think a lot of times people try to sleep until the last possible moment, and while sleep is essential, you don’t want to feel overly rushed, as you’ll constantly feel like you’re just trying to keep up instead of feeling truly prepared.

Who’s the coolest celebrity you follow on social media?

Pop singer/songwriter/producer Charli XCX. Not only is she incredibly talented and creative in the music she makes, but she also has such a wonderful and genuine relationship with her fans, who she calls her Angels. She’s super outspoken about her support for LGBTQ+ rights and is always responding to fans and sharing memes that fans create of her.

I was raised Catholic but left the faith at an early age.
I have a niece that is a year older than me.
I’m trilingual and can speak English, French, and German.

Which Broadway show would you like to be a part of?

The production of Wicked. Especially from a technical/backstage standpoint, the entire world created for the Wizard of Oz is so full of whimsy and wonder that it would have been a dream to be able to make all that translate to the big stage. All the different set pieces and lighting effects would have been so much fun to work on!

Where’s the creepiest place you’ve ever been to?

I actually don’t believe many places to be truly creepy. I think we often play tricks on ourselves, intentionally or not. For example, many people would say that being in the woods at night would be creepy, but the truth is you’re in no more or less danger than if it were sunny. It's just our brains filling in the unknown aspects due to the darkness with worst-case scenarios.

What unusual animal would you like to have as a pet?

I think it would be super cool to have a pet snake. I know a lot of people might be a little freaked out by snakes, but part of me thinks some of them can be quite cute. Plus, from a historical and symbolic standpoint, snakes are symbols of healing, transformation, and rebirth on account of their ability to shed their skin.

Do you remember what gift you really wanted for your 10th birthday?

I can’t remember for certain, but I think I wanted the Nintendo GameCube around that time. Even as a little kid, probably 5-6 years old, I remember playing video games with my dad. And I remember seeing TV advertisements for Super Mario Sunshine for the new GameCube and really wanting to be able to play that.

Which is worse: knowing or not knowing?

I tend to think not knowing is worse. If you know about something potentially bad, you can at least plan ahead for it and even perhaps turn it into something positive. The anxiety of not knowing how something will turn out can be nerve-wracking.

What about getting older scares you the most?

I think the death of family members or close friends is probably the scariest part of getting older. As time passes, I realize that my time with others is decreasing. I don’t think anyone is ever really prepared for the death of their parents or other close people in their life, but for me the thought truly terrifies me.

When I was 13, I went on a trip up to Fort Bragg and did a zipline course off one of the jump towers, but I don’t think you could pay me any amount of money to ever do that again. I’m terrified of heights and I’m not even entirely sure how my dad convinced me to try it to begin with.

I think this might be a controversial answer as it’s a much more recent song, but I think Venice B**ch by Lana Del Rey is one of the best love songs ever written. It’s this grandiose 9-minute track that’s mostly psychedelic instrumentals.

Would you much rather change the past or know the future?

I would rather know the future, or least know one possibility for the future. Without everything that has happened in the past, I don’t think I would be where I am today. I don’t tend to believe that the future is set in stone either though, so knowing the future is really only knowing one particular pathway.

Illustration by Justin Teh