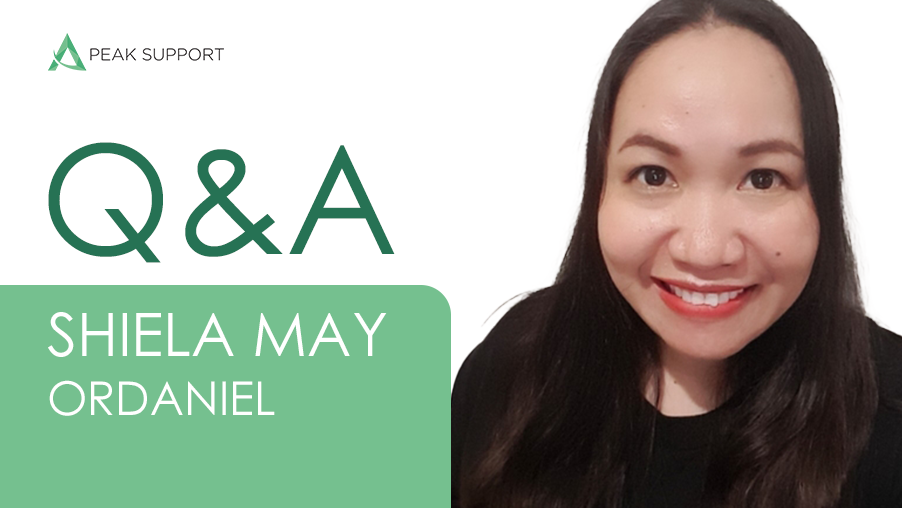 The year was 2016, when a former colleague referred Shiela to Peak Support. And then two days after her job interview, she was hired! People in the company and those close to her endearingly call Shiela by her nickname – Shim. She has the fondest memories of watching reruns of the Looney Tunes show when she was young. But her all-time favorite animated movies are Up, Inside Out, and Monsters Inc. Shim’s eclectic playlist features songs from the Bee Gees, Shakira, Pink Sweats, and various K-pop artists. Although she doesn’t spend that much money on herself, she does admit to currently saving up for her dream home. Want to know something cool? She is friends with another girl, who she shares the same birthdate (yes, even the year!) with, and who was also born in the same hospital as her. They fondly call each other “Twinnie.” Read our first Q&A blog for 2022 and get to know Shim better.

What do you do to show your loved ones how much they mean to you?

I cook or buy them food. My family is not really the showy type when it comes to expressing emotions. But if there's one thing we enjoy doing together, it's eating – sitting down and talking over food. Most times I also cook/bake and give them away as gifts.

Who do you think is the most underrated Hollywood actor/actress?

Famke Janssen, who is most known for playing Jean Grey in X-Men. Her great acting is shown in a long list of movies and tv shows, and she also directs. I believe she deserves more credit and recognition for all the impressive work she has done.

When was the last time somebody proved you wrong?

Just recently. These last few weeks, my niece has become more interested in baking. While I try to stick to the recipe as much as I can, she likes to experiment with the ingredients, oven temperature, and baking time. I was pretty sure her first batch of cookies would fail, but I was surprised that they turned out great.

Where's the one place you dare not go to?

I won't go to horror/haunted houses even if you pay me. I don't want to be traumatized for life. I tried going once, and let's just say that it wasn't an enjoyable experience for me.

What’s the first thing you grab a hold of when you wake up?

My phone. Only because I have to turn off the alarm. Then I grab my pillow again and go back to sleep.

Which fictional character would you like to become in real life?

It would be awesome to be able to talk to animals like Dr. Dolittle. First thing I'll do is sit down with my four dogs and have some serious conversation on why I need to brush their teeth. They have to understand that it's for their own good and stop fighting me about it. And that my potted plants don't need their pee as fertilizer.

How prepared are you for the future?

It's difficult to prepare for something that you know nothing about, so I can't say how fully prepared I am. But having insurance policies and keeping a savings account does give me some peace of mind. This year, I've also decided to be more physically and mentally prepared for any curveball life throws at me.

What funny question would you ask Adam and Eve?

To Eve: Why didn't you read the apple's terms of service carefully?

Why do we hold on to people/things that don’t matter?

Because we are sentimental beings by nature. There are people and things that don't matter anymore but at one point in our lives, they did. And we think that letting them go will make us lose those precious memories.

What career advice would you give your 23-year-old self?

To look for a more stable and well-paying job. You see, during this time, I was mostly doing volunteer work. I was living with my parents and had no financial obligations. If I had a regular job then, I could have started earning and saving early on.

On a scale of 1 to 10 (being the highest), how good are your survival skills?

I'd say a seven. It really depends on the situation, but I think I have the basics down. I have a medical background, I'm kind of like a handyman around the house, I can swim, and I'm not a picky eater. I had survival and rescue training with the Red Cross too when I was younger too.

Have you ever donated blood?

Plenty of times. Donating blood is the same as giving the gift of life – which is priceless in the true essence of it. I'm also a huge advocate of blood donation. As a matter of fact, when I was in college, I joined a project proposal contest during a national gathering of the Red Cross Youth. My entry was a campaign encouraging more young women to donate blood. The project placed 1st and I won a trip to Boracay.

Would you ever accept a one-way ticket to outer space?

No. Because that would mean I would have to pay for the trip back home out of my own pocket, and I would never abandon my beloved Earth.

Virus Detected. This is not a Wi-Fi name though. It is actually the name of my mobile hotspot. It's always funny seeing people freak out a bit when they think they've connected to something that they shouldn't have.

I can’t help but wonder how different the world would be if _____.

…dinosaurs still walked the earth – the huge ones specifically. We would probably still be living in caves because nothing gets built. They would trample over everything before any sort of construction can even begin.

Illustration by Justin Teh